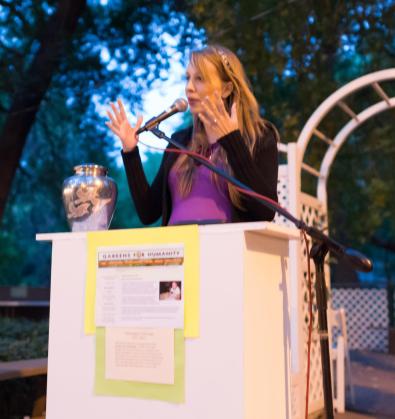 He reminded me to use my voice…so I did, for him. ~ Christopher Lane’s Memorial Service 8/25/12 ~ Photo borrowed from Christopher’s Facebook page

I thought I was doing fine, since the Memorial. I doused that place in a good storm puddle of my own tears on Saturday, and I guess I thought that’d do me for awhile.

But, today, it came back. Listening to this haunting, powerful, poignant, bomb-hitting-your-house sort of poem of Christopher’s. I’ve never heard anything like it in my life. I hadn’t heard it before he died.  The first time I heard it was at the Memorial – so now, hearing his voice is like putting a stethoscope to a grave and catching the waves of a heartbeat.

I often think, who am I to be so affected by his death? I can’t even begin to comprehend his family’s pain, his wife’s sickening grief.

And here I am, grief-stricken in my own way…but I’m figuring something out about myself.

I have chosen to put myself deep in the potholes on this road, right in the path of death’s river – because of something a bereaved parent, whose 15-year-old daughter passed away, said to me the other day.

“It is not ours to understand the ebb and flow of life and death…impossible in a dualistic, egoic body. I know grief…losing a child is my awakening to the Unknown. I do know that there is something that is called ‘Mystery’ that knows the way to understanding if we are just willing to not tell a story of it being any different than what it is.”

She went on to say, “It is strange, but loss of this kind, if embraced, is truly the way of accessing something deep within us that would have never broken open.”

I could have distanced myself from many of these deaths. The night my Aunt died, I could have spared myself seeing her die. I could’ve stayed at home, not brought my Grandmother to say goodbye to her daughter, and just had a phone call to feel, rather than the aroma of death itself to haunt me. With many of the deaths since, I could’ve missed out on the last moments – I had all the best excuses in the world, but instead, I put myself right there, at death bed after death bed, for my own unique “near-death experiences.”

I’ve been thinking a lot lately about Near-Death Experiences, but in a different way than most. More and more people are coming forward, sharing the depths of wisdom to be seeped out of NDE’s.

I have been having my own NDE’s. Although I’ve never died and come back to tell the tale, I have been “near-death,” as in at its bedside, at its feet, in its hours and weeks and months preceding, in its final moments, in its post-mortem rituals, in its mortuaries, crematories, graveyards, obituaries and Memorials – too many times to count now.

I have meditated at the bedside of agony. I have whispered to the dying. I have sang a Hallelujah chorus’ into Heaven for a Christian. I have held Shiva for a Jew. I have felt the arm of my dying Grandmother on my shoulder from the other side. I have conversed with old friends in my wakeful dreams.

These “near-death experiences” have been my awakenings, as the death of her daughter was my friend’s awakening. They have thinned the veil between life and death, scooped out my soul into a cavernous, porous, eager opening, and reminded me of Who I Really Am, again and again.

Memorial services have become my platform (bet you won’t see that on Ms. America’s docket!) – the place where I, melted down to my purest form of Being, pour out ladles of unencumbered truth, transparency, heart and wisdom I could only have reached in the soils of grief.

And so, today, as I shouldered my bathroom wall like a dear friend, weeping into its arms at the loss of Christopher once again, I find I’m not grieving in this hopeless, senseless, aching, depressed sense of old. I’m just grieving. Grief does not have to bear merely negative connotations. It can bear that ‘Mystery’ – that opening to the divine – if we let it.

I trust that Christopher is still with us. I’m confused, and still trying to wrap my head around the “story” of his death – his young age, good health, lack of explanation for his death, and his beautiful family left behind. But, I know he is still with me, and I am at peace with his death, because I can feel him conveying that message to me from within. Still, it hurts, though, still I ache, and this is par for the course, no matter how much I’ve faced death, how “at peace” I am with it, how enlightened I may or may not be.

For the last three years, I’ve often been afraid to share how I feel, like I’m doing right now…so afraid you were so sick of hearing it again, and again. Sometimes, I post on here, or Facebook, and feel like I can hear my friends’ moans, “Another death for Megan? Oh geez.” I think those are my own insecurities. In truth, I know few people who would feel anything but empathy for the profound prickers of pain I’ve been picking out of my knees lately.

I’m realizing now, that I am who I am for a reason. There is no one like me. Only I have had these experiences, and only I have handled them through this filter of “Megan,” the girl who loves hard, feels deeply, bears her soul honestly, and thus…experiences loss on a profound level, folding in the petals in grief, but opening them again and again each Spring.

So, I’m not apologizing for who I am anymore. These experiences have shaped me and taught me Masters-degrees of wisdom. I may grieve but that doesn’t mean I am “depressed” or that anything is wrong with me at all. It’s just a process, one that is required of, and owed to the honor of every soul we lose in this lifetime.

My NDE’s have given me so much to share…and while the “stories” we tell ourselves usually bear only negative connotations to death, dying and grief, I believe I am living proof that opening ourselves completely to the great mysteries of Life and Death, bears promise in either direction. Why should we embrace one, and shun the other? Both are part of our experience. Grief deserves time, attention, honor and embracing, and a willingness to sit at death’s bedside – to embrace the loss experiences in our lives – while painful, can also give us a glimpse of “Heaven,” the one that we find glowing within, when we, like statues, are broken open.

One thought on “A Different Kind of Near-Death Experience”

CLICK ON THE PHOTO TO READ "THE GRIM REAPER GIRL" Viral Post ----- I'm Megan Aronson. I'm a writer, speaker and Mom of 4. In 2009, a devastating slew of losses hit our lives. Over 5 years we lost 21 people, our home, my job, a baby, and our daughter's 5 year old best friend. Then, we faced the beast of Addiction, and our family became a miracle. This is my story, my life, my love - writing my way through and out of the darkness, with you to witness the beauty.